Add to Lightbox Download
Photograph by © Dan Callister
www.dancallister.com
The dense population of Cape fur seals August 09, 2016 at this time of year attracts the seal's main predator, the flying Great White Shark. Seal Island and the adjacent waters provide rare opportunities for those who wish to witness attacks by White Sharks on the Cape Fur Seal and to observe social interactions amongst creatures of both species. The island is well known for the way the sharks ambush their prey: a shark launching an attack will come up from underneath and often hurl itself out of the water with the seal in its jaws. It has been shown that if the seals enter the "Ring of Death" (where the sharks circle the island) on the surface instead of at the murky bottom, they are more likely to be picked off by the faster and more aggressive Great White Shark. All pictures from an ongoing project by British photographer Dan Callister
PICTURE SHOWS A GREAT WHITE SHARK BREACHING ON A CAPE FUR SEAL, SEAL ISLAND, FALSE BAY, SOUTH AFRICA
[Exclusive]
[ Pictures]
**© DAN CALLISTER. FEE MUST BE AGREED BEFORE USAGE. NO WEB USAGE WITHOUT APPROVAL. ALL RIGHTS RESERVED**
Tel: +1 347 649 1755
Mob: +1 917 589 4976
E-mail: dan@dancallister.com
Web: www.dancallister.com
3149 41st St, #3rd Floor, Astoria, NY 11103 USA
Photograph by © DAN CALLISTER www.dancallister.com 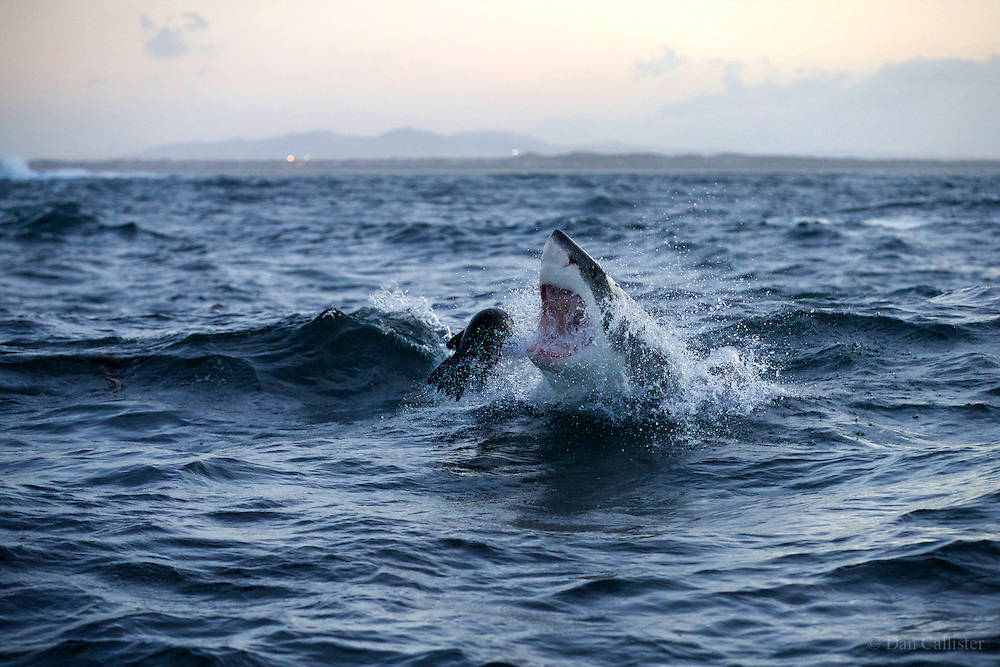